As we previously reported, past contributors to WH New Short Stories, Brian Kirk and Jill Widner, enjoyed a double win at the Cork International Short Story Festival 2019. The garlanded stories are set to be launched in chapbook form at 2:30 p.m. on Thursday, September 26th at Cork City Library.

Frankly, we’re sharing some past glories here to encourage writers to submit and entrust us with their short stories for New Short Stories 11. (Submit)

Distinguished author Maggie Gee was the judge for the Willesden international short story prize in 2011. We were honoured when she came to our results event in the Willesden library centre events studio to announce her verdict. Maggie was also generous with her comments, referring to each of the stories in turn before revealing the winner.

And if you’ve reached the end of that video and want to see what happened next, here’s the answer. The charming Mary O’Shea, all the way from Cork for the night, graciously accepts her first prize award. 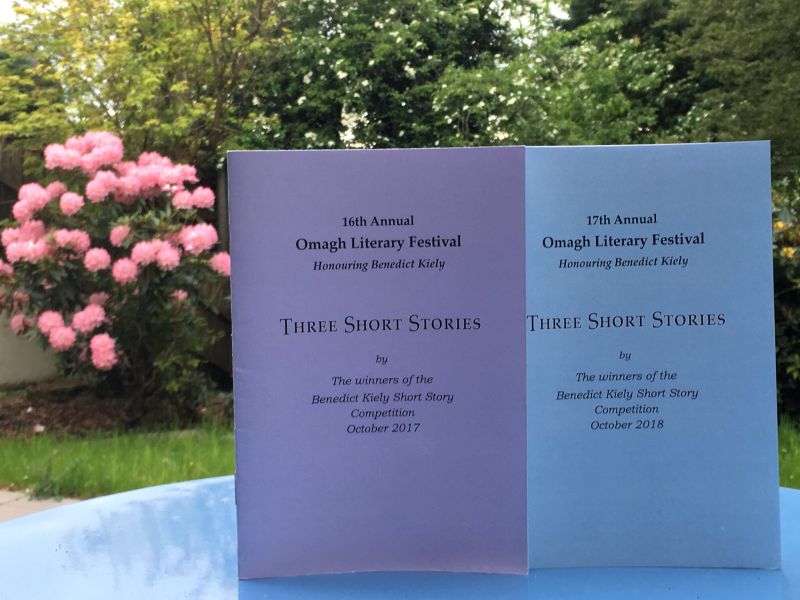 To celebrate the launch of the 2019 Benedict Kiely Short Story Competition, we caught up with last years winner, Louise Farr, to hear more about her work and what competitions like this mean to emerging writers. Omagh Literary Festival: Hi Louise. Tell us a bit about your winning short story, Sing to Me, and how […]

‘When I started I thought I wasn’t a person with a good memory but you tap into uncanny places where you have things saved up that you didn’t know you did until you got to that level.’

David Means reading and interview in the Firkin Crane as part of the Cork International Short Story Festival 2017, moderated by Sinéad Gleeson

You can read the rest of “Fistfight, Sacramento, August 1950” by David Means online here in Harper’s magazine.

David Means was the judge for our short story competition in 2013. You can read the prizewinning stories in Willesden Herald: New Short Stories 7.

The event is free of charge but please register here as the venue is limited to 50 seats:
https://www.infinitylandpress.com/eventspage

Steve Finbow is a writer and also a reader of prodigious talent. At the launch of New Short Stories 1 at Willesden Library Centre theatre, he gave us an excerpt from his novel “Balzac of the Badlands”. It was awe-inspiring: a rattling, unstoppable torrent of words – all brilliant – with a rhythm and pace, not too rapid but staccato, inexorable – that had beads of sweat rolling down his face. It didn’t let up from start to finish. His story “Mrs Nakamoto Takes a Vacation” is in NSS1.

This picture is of me after the interval at that event, brandishing a mocked-up copy of The Willesden Herald, as the strains of “Tell Me More and More, and Then Some” by Billie Holiday faded out. Oh yes, we had a sound man, mixing desk, theme songs and everything. Those were the days. Or were those later days all jumbled up? Yes, but who actually cares? But, yeah, look at those speakers -and theatre lighting- there. (Steve)

Catherine Menon was one of the contributors to Willesden Herald – New Short Stories 8.

Katy Darby announces the overall winner and runners-up in the Willesden Herald international short story competition 2016, and shares her responses to each of the stories. In the audience were all but one of the writers whose stories were short-listed, including some who travelled from as far away as Italy, France and America.

Towards the end of the video, it becomes clear which story has taken first prize, and we proceed to the presentation and a charming acceptance speech.

And the winner is…

In accordance with the rules, the prize fund of £750 was divided equally among the finalists, who also received two copies each of the anthology.

Here is Miranda Harrison, reading from the opening of Love and Hair by Olga Zilberbourg.

To find out who really sent the text, and what happens in the end, you will have to read Willesden Herald: New Short Stories 9. Available from Amazon.co.uk (for UK, Ireland and Europe) and Amazon.com (US and rest of the world) and other online booksellers.

The ten best short stories of 2016, are presented in the random sequence in which they were originally read, as good a system as any!, and together present a pleasing selection of contemporary fiction, or to put it more snappily:

Why not come to our results and book launch event this Thursday at Willesden Library Centre, from 7:30 pm? We’re putting on a terrific show as well as announcing the overall winner for 2016 and prizegiving. Professional actors will bring short excerpts from some of the finalist stories to life.

This is a FREE EVENT, venue capacity 100 seated. Refreshments will be provided. First come, first served.

Tony Bell. Evening Standard Award nominee for A Man for All Seasons, Tony Bell has performed all over the world with award-winning all-male Shakespeare company, Propeller, playing Bottom, Feste, Autolycus and Tranio. TV includes Coronation Street, Holby City, Midsomer Murders, EastEnders & The Bill. He recently played Brian Clough’s sidekick Peter Taylor in the stage adaptation of The Damned United at the West Yorkshire Playhouse. He also appeared in Phelin McDermott’s Improbable production of The Tempest. He now splits his time between directing in drama schools, acting and occasionally reading great stories. He is also a radio and voiceover artist.

Peter Kenny has worked for A&BC, The Royal Shakespeare Co. and The BBC Radio Drama Co. An award-winning recorder of audio-books, he has read over 100 titles, everything from Iain M. Banks, Neil Gaiman, and Andrzej Sapkowski to Jonas Jonasson and Paul O’Grady “…from the sublime to the cor blimey!”  Visit peterkenny.com

Gina Challen is originally from London. She moved to West Sussex in 1979. In 2012, she left her job as an insurance broker to complete a masters degree in creative writing. This she fondly refers to as her mid-life crisis. Although originally a city girl, the farmsteads and woods of the downlands hold her heart, they are the inspiration for her writing, the landscape to which she knows she belongs. Previously, her stories have been anthologised in The Bristol Short Story Prize Volume 8 2015, the Cinnamon Press Short Story Award collections 2012 & 2013, and the Willesden Herald New Short Stories 8, 2014 and Rattle Tales 2, 2012. Two of her stories were shortlisted for the prestigious Bridport Prize in 2014. You can also find her stories and critical essays online with Ink Tears and Storgy magazines and Thresholds Short Story Forum. She is currently working on a short story collection. www.ginachallen.co.uk

Tracy Fells lives close to the South Downs in glorious West Sussex. She has won awards for both fiction and drama. Her short stories have appeared in Firewords Quarterly, The Yellow Room and Writer’s Forum, online at Litro New York, Short Story Sunday and in anthologies such as Fugue, Rattle Tales and A Box of Stars Beneath the Bed. Competition success includes short-listings for the Commonwealth Writers Short Story Prize, Brighton Prize, Fish Short Story and Flash Fiction Prizes. Tracy completed her MA in Creative Writing at Chichester University in 2016 and is currently seeking representation for a crime mystery novel and her short story collection. She shares a blog with The Literary Pig (tracyfells.blogspot.co.uk) and tweets as @theliterarypig.

Susan Haigh returned to northeast Fife in 2013, having spent eight years living in a cave house in the Loire Valley. She had previously worked on a series of short stories, supported by a Scottish Book Trust mentoring scheme, and continued to write stories and a novel in a caravan under a vine by a river (not as glamorous as it sounds!). Her work has won several awards in Britain and the USA and has been published in Mslexia, Cadenza Magazine, Sunpenny Anthology, New Writing Dundee 8, Beginning Anthology, the Scottish Arts Club Short Story Awards website, the Women of Dundee and Books anthology and a number of American journals and anthologies.  In 2016 she appeared on a short list of six for a Scottish Book Trust New Writers Award and published poems in Scottish literary journals, Northwords Now, Gutter Magazine and the StAnza Map of Scotland in Poems. She was also a finalist in the 2016 Scottish Arts Club Short Story Competition. She reviews and interviews for a number of journals, including Dundee University Review of the Arts. She teaches German at Dundee University.

Rob Hawke lives and works in Camberwell, London. His short fiction has featured in Momaya Short Story Review and Shooter Literary Magazine, and he holds an MA in Creative and Critical Writing from University of Sussex. He is currently working on his first full length novel, a political drama set in South West England. To support his writing Rob works part time at a psychology institute.

Anna Lewis’s stories have appeared in journals including New Welsh Review and The Interpreter’s House. Her stories and poems have won several awards, and she was short-listed for the Willesden Herald short story prize in 2013. She is the author of two poetry collections: Other Harbours (Parthian, 2012) and The Blue Cell (Rack Press, 2015). She lives in Cardiff.

David Lewis grew up in Oklahoma, did an MA at UCL in London and now lives in Paris. His short stories and essays have appeared in J’aime mon quartier, je ramasse, Chelsea Station, Liars’ League, The 2013 Fish Anthology, Indestructible and Talking Points Memo. He irregularly posts essays and translations on Medium, as @dwlewis.

Catherine McNamara grew up in Sydney, ran away to Paris to write, and ended up in West Africa running a bar. She was an embassy secretary in pre-war Mogadishu, and has worked as an au pair, graphic designer, translator, English teacher and shoe model. Her short story collection Pelt and Other Stories was long-listed for the Frank O’Connor Award and semi-finalist in the Hudson Prize. Her work has been Pushcart-nominated and published in the U.K., Europe, U.S.A. and Australia. Catherine lives in Italy.

Barbara Robinson was born in Manchester where she still lives, writes and works. She writes short stories and is currently working on her first novel, Elbow Street.

Daniel Waugh was born in London and has lived in France and Yorkshire. He lives in Wimbledon with his wife, three-year-old daughter and black cat. ‘Last Call at the Rialto’ is his first short story.

Olga Zilberbourg grew up in St. Petersburg, Russia and moved to the United States at the age of seventeen. Her English-language fiction is forthcoming from World Literature Today, Feminist Studies, and California Prose Directory; stories have appeared in J Journal, Epiphany, Narrative Magazine, Printers Row, Hobart, Santa Monica Review, among others. She serves as a co-facilitator of the weekly San Francisco Writers Workshop.

This is a copy of the newsletter that went out this evening to all our subscribers.

The shortlist is in.
The book is with the printers.
And we’re going to have a wingding.

Dear reader, thanks to those of you who entered or took an interest this year. It was a privilege and an adventure reading the submissions, of which there were 344. And it wasn’t easy narrowing them down to just ten, there was fierce contention for the places on the shortlist. Below you will see the ten stories that made it all the way. On December 8th in Willesden, Katy Darby will reveal which one has taken the Willesden Herald short story prize 2016. Cheers, Steve Moran (Editor) 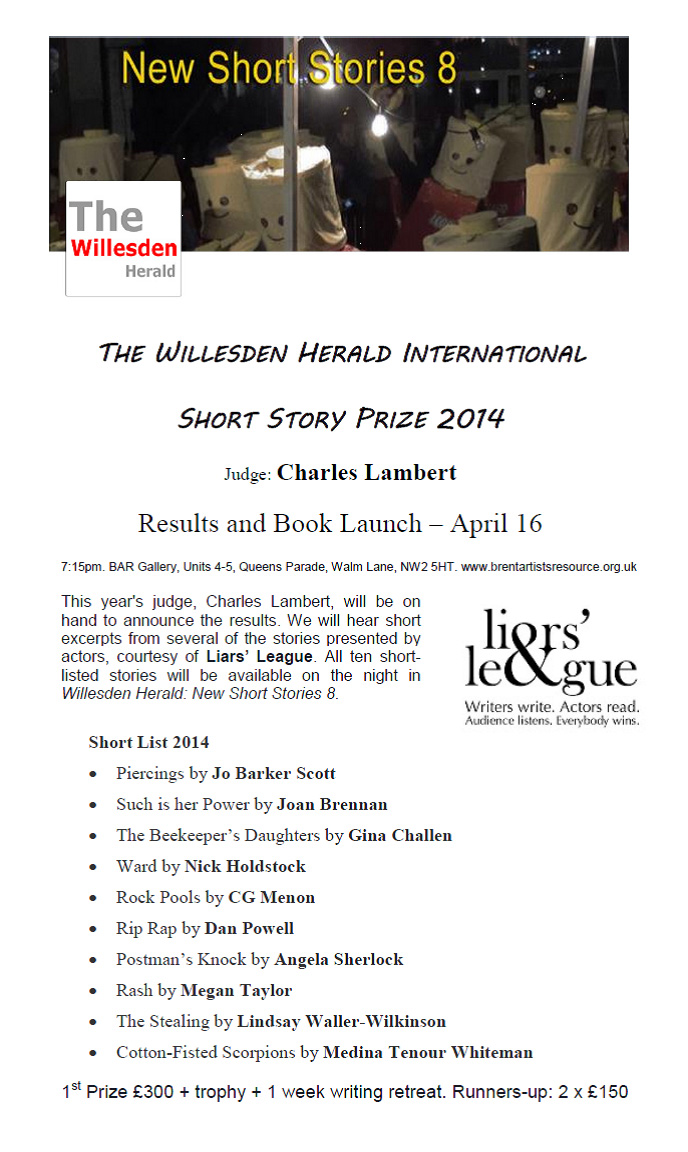 We’re delighted to announce that novelist and short story writer Jarred McGinnis has agreed to judge the Willesden Herald Short Story Competition 2022. An American abroad, his debut novel The Coward (Canongate, 2021) was a BBC2 national television “Between the Covers” recommendation. It is also about to be published in the US and in France, … END_OF_DOCUMENT_TOKEN_TO_BE_REPLACED

Want to buy from proper bookshops?

Your advert in Willesden Herald New Short Stories 12? Organisations, would you like to help fund our current project, Willesden Herald: New Short Stories 12? We are open to including page adverts of a literary, community or educational nature in the forthcoming anthology. We have never applied for or received any public funding. In return … END_OF_DOCUMENT_TOKEN_TO_BE_REPLACED